Welcome to our 3rd Annual Salute to Rett Dads! Each day this week leading up to Father's Day, we will share a blog written by a father of a girl suffering from Rett Syndrome. Later in the week we will share a video slideshow of over 100 dads with their beautiful girls.
Just because these girls have Rett Syndrome does not mean they are not still "Daddy's Little Girl" .... times one million! To all the Rett Dads - thank you for your special role in raising these very special girls. 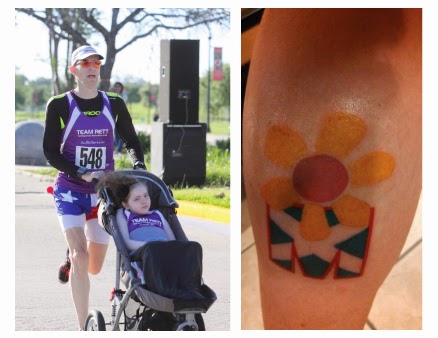 
Catherine was diagnosed with Rett in 2004, at the time the diagnosis came as such a relief. Catherine had been having a tough time getting nutrients from her food and was barely over 20lbs at the time. She was getting her G-Tube installed after going through the feeding via the tube through her nose torture period.

Things went from well she definitely had something different diagnosed every few weeks to becoming involved in the most wonderfully supportive Rett Family of people in New Jersey. I'm generally optimistic about things so I saw all the happiness in the Rett Families we met and was comforted in many ways.

Several bouts of Pneumonia with Catherine turning blue at times accelerated our move to Texas and I was all for a move to somewhere warm. The warm weather re-ignited my desire to run as I used to do before I left Scotland for America in 1996. It wasn't long before Catherine and I were participating in 5K's and Half Marathons. Catherine enjoys running with the wind in her hair and fully expects me to be competing if not for overall top 3 then for at least some kind of age group award. Luckily we have always managed this.

As of this year, I have run for Team Rett in the Boston marathon 4 times, raising a lot of money to be used for clinical Trials. Catherine's running highlight was of course being infamous at the Princess Half Marathon and being hauled off the course after only a few miles, Catherine enjoyed this even more than running.

Catherine never lets me settle with participating in easy races or slacking off while training for such events [I'm sure she talks to me subliminally while I'm running]. When I hit 40 in 2010 I decided that a Marathon would be sufficiently challenging to do. I have since completed 30 and twice been Texas State champion: once in the overall division and once in the over 40's while wearing a pink tutu and a pink cape with Girl Power to Cure badges on it. 2011 was my first 50K though it took me 2 years to finish my first 50 Mile race. Me falling 8 to 10 times on such a trail race was pretty much my normal, fortunately I only ever broke one rib so far. This year I did my first half and full Ironman Triathlons, who would have thunk I could swim after all.

I'm ever so happy that Catherine is in a good spot with her health over the last 12 months and could not ask for more than for that to carry over to the next 12 months. I promised her I would drop 15lbs and become competitive in this triathlon thingy that I'm so new to.

I can't wait to see what crazy things Catherine inspires me to do over the next year.
Posted by Girl Power 2 Cure at 8:03 AM