With Father's Day coming up this Sunday, we asked Rett Dads to be our guest bloggers for the week. Just because these girls have Rett Syndrome does not mean they are not still "Daddy's Little Girl" .... times one million! To all the Rett Dads - thank you for your special role in raising these very special girls. 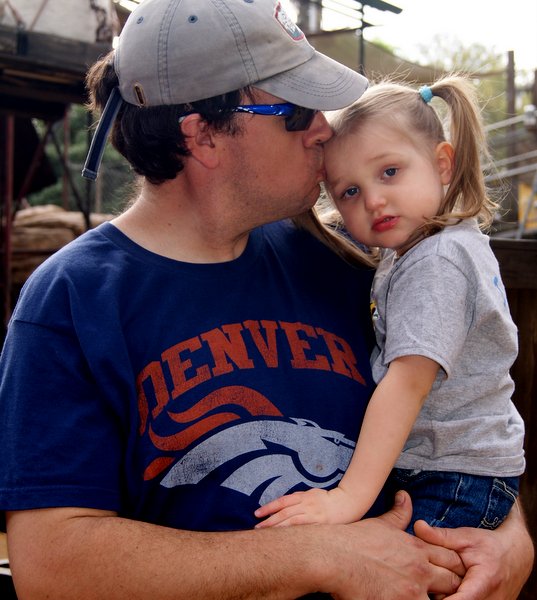 Teagan gave me a hug the other day. Not a Rett hug, where she sort of flops over on you, a -really real hug. She reached her arms up, wrapped them around my neck and squeezed. It was amazing. I’m pretty sure it was the first and only time she’s been able to do that. She knew it too. When she let go, I got her best smile, followed by a big fat kiss. Teagan kisses are a lot like being kissed by a St Bernard, sweet, affectionate, but wet enough that you might need a towel afterwards. It was our moment.
My Teagan is Daddy’s little girl. We have sort of a special understanding. I think we developed it some time during the hours and hours we spent walking around the house when she was an infant and wouldn’t sleep. T couldn’t master the bottle. When mom went back to work, she and I and big brother Reese were on our own every weekend, Teagan just couldn’t get that bottle to work. We tried dozens of different nipples, nothing helped. One night I threw her and Reese in the car, and drove over to the hospital so mom could breastfeed in the middle of her shift. Most nights we just walked laps around the house, with the bottle dripping all over until she FINALLY fell asleep. In retrospect, that may have been our first clue that something “wasn’t right” with our little girl.


By the time she was nine months, her mom was convinced that Teagan wasn’t developing normally. By twelve months everyone else agreed. By thirteen months the revolving door of therapists began making their daily appearances at the house. Sometime around eighteen months we woke up and found that Teagan couldn’t get the cheerios from her high chair tray to her mouth anymore. My now pregnant wife and I dragged Teagan and Reese to appointment after appointment with no answers in sight. We pleaded for Rett testing, Mom knew. It was the hands. At twenty months old, we found out. Rett.  My wife Danielle was home alone. I was out of town, visiting the Grandparents with both kids. Danielle was too pregnant to travel. Teagan’s baby brother Morgan was born two weeks later.
We never had time to process. We had a new baby. We had service coordinators to argue with. Therapists to recruit. I was just trying to stay on top of all the things there were to DO. I never really took the time to cry for what she has lost. I never had the time. Eventually, it hit me. Hard. Sobbing on the bathroom floor hard. And that grief, that sense of loss, it’s with me, with us, with our family every day. Our lives are forever altered. Our little girl is lost. She’ll never talk. Never say “I love you, Daddy.” She’ll never have a first date, never play soccer, never learn to drive, never get married, never be somebody’s Mommy.  She’ll never run, never swim, never ski, never go to the bathroom without help. Every single day that grief, that loss is still there, still fresh. Every time somebody asks that most innocuous of questions, “How are you?” There it is. You are not OK. She is not OK. It’s not ever going to be OK ever again.

There are bright spots. Rett has made, and continues to make my two boys into wonderfully compassionate and understanding little people. I know they will be better men for having had Teagan in their lives. There are some really, really wonderful people in the world. Like Dr. Sasha, who loves all our girls like her own, sees their potential, and has dedicated her career to helping our girls be the very best they can be. Like Sasha would say, “So they’re ready when the cure is found.” Like Kristie, our physical therapist, who has been there for every single victory, and every single loss in Teagan’s personal battle against her body.  And Leah, her teacher. When we had nobody available to give speech therapy , Leah came down to NYC with us, at her own expense, to learn PODD, and has helped Teagan not only to communicate, but taught her how to be a little girl, by having enough respect for Teagan to just play with her. We’ve met so many loving parents, so many loving families.

My Teagan has Rett syndrome. There are many things she cannot do. There are many wonderful things she can. She can communicate beautifully.  She has the amazing power to make you fall completely in love with her with her laugh. She is goofy. She likes to cuddle, especially with her Daddy. She is smart. She is strong, and very brave. When she smiles, she makes it all OK. She gives the biggest, wettest, sloppiest kisses ever. Freely. And this year, for Father’s Day, she gave me a hug. It was the greatest gift I have ever received.
Posted by Girl Power 2 Cure at 7:44 AM