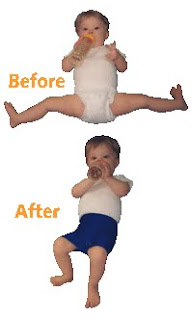 This week, at RettGirl.org we are featuring Hip Helpers® Support Shorts. We have these incredible little shorts in our Product Reviews under Positioning.

We discovered these during early intervention with our daughter. They were recommended even before her diagnosis when we were going through that phase whem the only thing the doctors could tell us was that she was 'floppy' or had 'low tone'

We knew she had always slept like a frog when on her stomach and was always completely splayed when on her back. We suspected nothing and called her our little froggy.

When she walked she looked like a duck with her feet always pointed out because she was so hyper extensive. The docs could bend her further than I had ever seen legs go.

We ordered 2 pairs of the shorts. One for while she was asleep and one during the day. The shorts hold her hips in proper position and keep her from splaying. Her walking improved because her balance improved. It almost appeared as though she had previously been trying to walk with her hips out of socket.

There are 5 standard sizes and they will also make custom sizes for you. They have a great size chart and very cute colors to choose from. They are advertised for babies and toddlers in early intervention programs but our daughter is 6 and 44 pounds and still fits in her size C.

For your girls who are hyper extensive in their legs and hips I would highly recommend these. A big plus is that they are super affordable in comparison to everything we have to buy on the Adaptive market at $15-$22 a pair!

Good luck! Have a great week!

Terri V-For RettGirl
Posted by Rett Girl at 7:09 AM